This is an example widget to show how the Pushy sidebar looks by default. You can add custom widgets from the widgets screen in the admin.

An Introduction to Intelli-Hood

Most commercial kitchen hoods operate at 100% capacity all day long, even during idle, non-cooking periods. This costs the Irish food service industry millions in wasted energy every year. The Intelli-Hood variable speed drive control system is the only proven solution to this problem. Using a microprocessor and sensors, the Intelli-Hood primarily controls the extract to operate at the minimum level necessary, by monitoring conditions in the zone and appropriately varying the speed of the extract fan. The extract fan speeds are controlled by a variable speed drive control system. The system has been installed with over 1000 drives working satisfactorily, 24 hours per day on energy saving systems throughout Ireland the UK and Europe.

Average Saving in kW for a Commercial Kitchen

The Intelli-Hood system is usually installed with the extract fan running continuously, but during levels of low activity will slow it down to between 30-50% of maximum operating speed. At these levels the energy saved is between 87-97%.Even larger savings will often be achieved from the reduction in losses of conditioned air. A typical extract system, running at maximum speed, will draw “conditioned air” into the atmosphere at a rate of 2-4 cubic metres per second. This air has to be replaced at considerable cost. The Intelli-Hood system has been shown to typically reduce the conditioned air losses by 40%.

The graph to the right shows an average saving in kW for a commercial kitchen. The dips in the dark blue section show the fan ramping down when it is not in use. Compare this to the light blue section and you can see where the savings are had.

Typical returns on investments are between 1.5 – 2.5 years. Additional benefits can be obtained in respect of:

Fans consume power in proportion to their speed cubed. Therefore an extract fan running at 50% speed will only consume 13% of the energy (½ x ½ x ½) but will extract 50% of the air. This is illustrated by the “Affinity Laws for Centrifugal Loads” as shown to the right 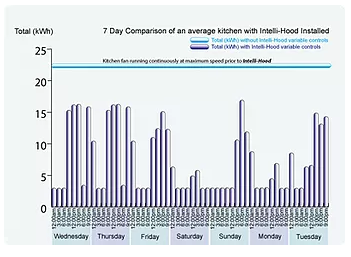 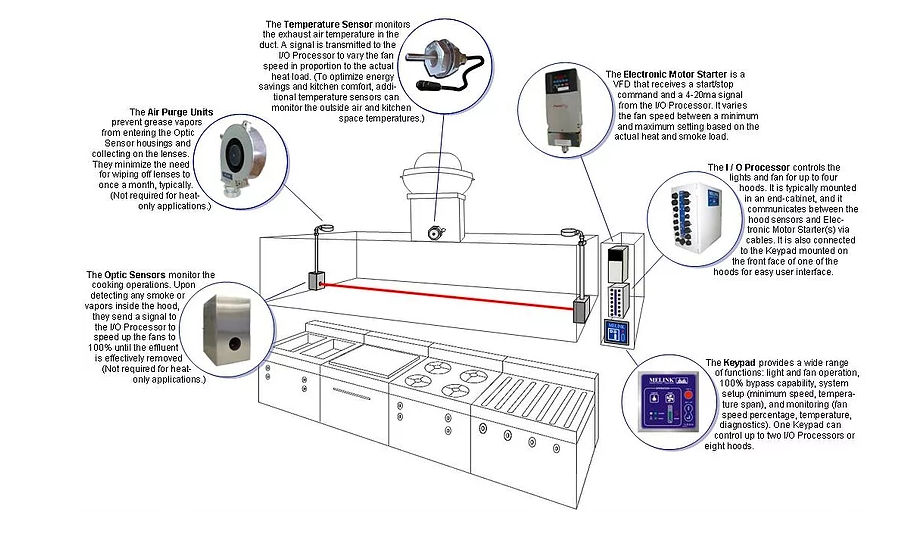